I’m trying to find a children’s book for middle school/YA age about a boy who collects monster memorabilia and is able to somehow bring them to life.

Mummies, Frankenstein type monsters, a blob etc. He thinks it is cool at first but of course it becomes a cause for concern. It deals a lot with him being an outcast for being a “Monster Kid”.

He eventually realizes the monsters can’t live in his bedroom and he has to get rid of them.
I cannot seem to get the right keywords despite remembering specifics about the plot.

I do not remember title but remember characters and some details from this book. It was a children’s book I loved reading when I was little and I was born in 1983.

The book I want had a little girl with dark hair (black or brown) and had red poppies, plus a cute green monster that I think liked to eat cookies but I feel had a Loch Ness monster type feel and maybe lived in a lake.

I’ve done searches trying to find the cover of the book but haven’t seen what I’m looking for. Hope you guys can help me.

I am trying to find a book that I used to read when I was younger at the school library. It was a scary picture book. From what I can remember, the story goes like this: there are 2 siblings (boy and girl I believe) that live in a village/community in the forest. I want to say that it is a native American community but I’m not entirely sure. They wander out too far from safety and stumble upon a creature that, based on the drawings, gave me nightmares as a kid. It’s extremely tall, covered completely with brown hair, sharp white claws on the feet and hands (but not too long), sharp white teeth and red eyes. The children try to escape but the creature chases after them. I do remember vividly a page where the kids are climbing a cliff, while the creature climbs below them. Somehow the rest of the village comes to the rescue and saves the children. I tried researching as best as I can but I can’t find anything remotely close. I know it’s not a wendigo story, the closest thing I can find based on appearance that I remember is the Tennessee Wildman. And I want to say that the author had other books with the same style of drawing.

I’m looking for a children’s picture book. Probably published between 1994 and 2004, a square white book, where … There’s a monster/bird/caterpillar? kind of thing that seems to grow … I remember the illustration being swirly, watercolor like with say leaves and feathers that get caught up in it as it grows???
Not Monster Mama but those colors and blurriness are on a similar track … Not a very hungry caterpillar, those colors are right but the illustrations aren’t cut paper…
What brings this book to mind is this fabric: 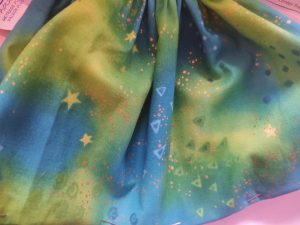 Do you think we have any chance of figuring it out?

I’m looking for a book I read sometime between 2005-2011. The cover was mostly blue and had a sword hilt on it I think. In the book a kid from our world somehow goes to another world. In this other world, the people fight with swords that the blade only actually exists if you believe? Little hazy on that part. I remember a scene where the main character loses a foot race to a younger kid from this other world. The people train using the swords by swinging them at giant boulders. The sword blade can heal any wound when pressed against it unless it’s caused by that type of sword. Might have had Christian themes. When in our world the main character was attacked by some sort of invisible monster that can’t be seen. Somebody saved him using one of the magic swords.

I’m hoping you’ll be able to help me find a picture book from my childhood that I have been searching for for years. My mum borrowed it from our local library (in Victoria, Australia) sometime in the 90s, perhaps any time from 1997 onwards. It was a dark (both in theme and illustration style) picture book with detailed illustrations similar to those of Gary Crew’s The Watertower. I think it was designed for older readers (8-12 years). I used to think the title was Is Any Body There?, but I’ve searched so many libraries, bookstores and databases for it that I must have got the title wrong.

In the book, the protagonist is walking through different landscapes that have recently been destroyed by something or someone. The protagonist walks into the woods and says “Is any body there?” (or something along those lines). The wood’s inhabitants reply something like “Yes, somebody was here”, and the trees say something like “It took our branches”.  I think other animals in the woodland also said that they had parts stolen from them, but I can only remember the trees.

The protagonist continues journeying and reaches a lake, where they also say, “Is any body there?”. The inhabitants of the lake also respond “Yes, somebody was here”, and say that something stole their body parts too. I can only remember the fish saying “It stole our eyes”. The illustrations very vividly depicted the fish under the water, with empty eye sockets.

The protagonist follows the trail of destruction through several other landscapes (sorry, I can’t remember them) and arrives at a house in a forest (I think). The protagonist makes their way to the basement, where they say for the final time, “Is any body there?”. A response comes from the darkness: “Yes, some body is here”. On the final page, there is a detailed illustration of a monster that is clearly constructed from all of the parts stolen from the animals, trees and environments.

The illustrations were in dark, earthy shades and I think it’s possible that the narration was either first- or second-person to heighten the immersion, but I can’t remember much more about the book than that. I’ve spoken to several librarians (including one who worked at the library we borrowed the book from originally) and booksellers, and no one knows of this book. Only my sister remembers it, otherwise I would have thought I’d fabricated it entirely.

Any help in solving this would be very, very much appreciated – this mystery has been annoying me for too long!