Looking for a book from about 1960 about a young teen girl. Her mom makes all her dresses, but she wants to babysit for extra money so she can buy “separates.” She babysits children who come down with diphtheria and she must work hard to save them while in quarantine. Good luck!

I read this book in the late 1980s, and really enjoyed it, despite finding his wife slightly infuriating.
The story started in the 1960s, and went through to the 1970s. On his first date at a diner with his (red headed? maybe?) girlfriend whom he marries, she tells him the salt and pepper shakers like him and she likes him. Their meeting when they decide to divorce is also in a diner, where she tells him that the salt and pepper shakers love him and he’s breaking their hearts. He leaves her for another woman, whom he marries.
I think that most of the story takes place in California, and during the summer they drink Orange Julius. He may have met his wife at uni.
It’s a quite funny novel, as I recall, and I really enjoyed it. I just cannot find it, even with all my powers of Googlefu.
I have no idea of the name, or when it was written, though I suspect it’s late 1970s or early 1980s, and I think it’s written by a man. The novel is first person from the man’s POV.
If you can find it for me, I will be eternally grateful. I know it isn’t much to go on.

Seeking a children’s book almost like a graphic novel, comic book/cartoon like, simple drawings, maybe black and white, pictures in bedroom looking out the window, as his father served as an air raid warden, helmet ? Moon out the window maybe, Published in early 50’s, late 40’s ????? I read it in mid 50’s

Looking for a children's/middle school age book from 1960s about a girl. A boy from England moves in next door. I think the setting is rural/farm community. She likes the way the boy says bath (baahth). For a special occasion she "plaits" her hair more loosely than usual so the plaits will lie flat when she wraps them around her head or pins them up. She leans over kettle/ pot of steam to create tendrils. That's all I can remember. My mom got it for me from the local public library in Chicago.

I think the book was to be one of a series, but I only read the first one. It was set in a land with a limited map, like a world within a land, and the people who lived in the land where unaware of the wider world.

There was a red dragon or lizard named Jaz or Baz or Kaz who was funny and the best friend of the human, who I believe was female.

The cover had the lizard-type creature perched on a roadside boulder, with the road winding down a hill and maybe clouds around the edges.
I believe I read it in the 90’s or 00’s

In addition, my son says this:
Kaz is the name of the dragon for sure. The land is separated by walls, and one or some start breaking down and that’s the main conflict. Later they find out that the world is set up that way because of fantasy space computers.

I recall a children’s story (I don’t think it was a book but rather a story in a children’s storybook) that I read in the early to mid 1970's.  It was set in the times of kings and villages. The king (maybe it was a prince or even the town mayor) had a contest for the best pie.  Apparently only savory pies existed at the time, no fruit pies. The story’s heroine, having no meat at hand, made a pie with apples and tried to serve it to the king/prince/mayor.  I think she was prevented by the king’s flunkies who were aghast at the thought of a pie with fruit but eventually she got to the king, served her pie with a piece of cheddar and won the day.  Voila, fruit pies. No clue about the author or the title.

The book I’m looking for is a picture book from my childhood. It’s about a small green creature, probably a lizard, who is looking for a home. He might also be trying to get out of the rain. He winds up finding a mushroom to hide under. The mushroom top falls off the stem and lands on his back, making him a turtle. The style of the book is very 1970s, though I’m not sure when it was published. The mushrooms in the book are tall and red with white spots. I also remember a yellow mushroom in the book with the same style.
I have included a bad drawing of how I remember the turtle looking by the end of the story. The mushroom might have been larger than in this drawing. 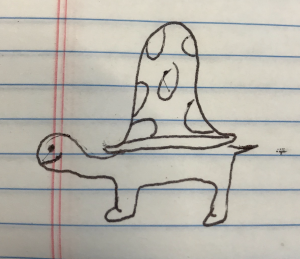 I’m looking for a children’s story about a princess who couldn’t clap, which embarrassed her family when they went to the opera. At the end of the story, she’s given a pair of gloves that button together at the wrists, so she can enjoy the opera with everyone else. I think there was a mention of something called “jumble mints” or “jumble sweets". It was probably part of a children’s anthology I had in the late 80’s and early 90’s. I’ve been searching for years; nobody in my family remembers this story and I’d be so thrilled to find it!

I’m trying to remember a book I read around 1962 - 1965. It was about a boy and girl who somehow get a magic ring and when they put it on, they can understand what the animals around them are saying. I just loved it and took it out of the school library again and again until my teacher asked me “wouldn’t you like to read something different?” I’ve been doing engine searches for a long time now and I can’t seem to find it. I think it was called either The Magic Ring or The Golden Ring and it wasn’t a Raggedy Ann/Andy book. It was cloth-bound and green … I think.  I’m sure that last point is most valuable to you. If you could help me that would be wonderful.

My search is for a children’s book, probably in the 1970-1997 time frame.  The book was a time traveling mystery involving a shy, loner-type girl who escapes to sit in a nearby very old tree.  On rare occasions, while in the tree, the girl time travels back to colonial times where she meets two girl friends in the tree.  At this point, the tree is much younger.  The colonial friends remark about the traveler’s shoes and how different they are.  The shoes are modern sneakers.  On a subsequent meet up, the time traveler brings an alphabet book which shows a picture of a giraffe listed for the letter “G.”  The colonials have never seen a giraffe.  At some point, the time traveling stops and the loner girl wonders what became of her colonial friends.  On a library day, the loner looks up colonial samplers.  She finds the sampler her colonial friends made when they couldn’t find her in the tree anymore.  The antique sampler is of the alphabet with a giraffe for the “G” letter and a stitched picture of the modern girl with her sneakers!  The title of this book is not known to me and i remember it had nothing to do with the possible subject matter of the book; therefore, not colonial samplers, mystery, time travel, etc.  The author was a woman, but I don’t know the name.  Please help locate the title and author of this book.  I am sure my two grand daughters would love this book, which  my daughter read years ago in Virginia.  Thank you!