I got a new toy!  It’s a rather heavy toy.  Cast-iron.  With black paint and stencil.  And a wheel crank that resembles a ship’s steering wheel.  Except cast iron, like I said.  It arrived in a heavy box with thick extruded foam as packaging (FedEx guy wasn’t pleased, but then again, he never is).  Why would a bookseller get excited about a hunk o’ iron, you ask?

Give up yet?  It’s a book press.  See?  Isn’t she pretty?  I showed her off tonight at our NOBS Forum of Show & Tell. 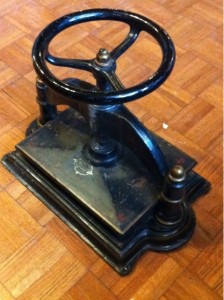 Harriett started Loganberry Books in 1994, acknowledging that what she liked best about perpetual school was the physical objects called books. Her personal biblio interests range from Robert Lawson to Virginia Woolf and various and asundry illustrated editions of Alice in Wonderland and old lepidoptera.
View all posts by Harriett →
This entry was posted in New Toy, NOBS, Rarities & Conservation and tagged art. Bookmark the permalink.