I have been making a point to learn more about children’s literature recently, and to that end, I have been checking out review copies of many upcoming children’s and teen books.  Here are the most engaging ones I have read:

This is, simply put, a fun read for the discerning middle-grade reader.  It will probably appeal the most to those on the younger end of that spectrum, but may be enjoyable for older children who have a big imagination, too.  Clark is a child whose parents think he is too old to play with stuffed animals, and go to great lengths to get him to be more “normal” – including sending him away to summer camp.  But it turns out that his “stuffies”, as they are called here, have minds of their own after all!  This delightful book mixes things up between Clark’s story and the perspective of his bravest and most beloved stuffie of all, Foon, as they fight against indifferent adults and a King Monster plaguing his household.  There are also detailed instructions for children to make their own stuffies included in this book!  (Out Now) 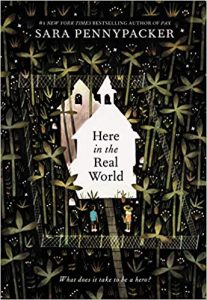 2) Here in the Real World – by Sara Pennypacker

This book, for middle-grade readers, tells the story of an 11 year old boy, Ware, who has a big imagination and little tolerance for social interaction or anything else that would make him the “normal kid” that his mom seems to desire.  When he is signed up for a recreation center summer camp, he rebels by climbing a tree over a wall and finding a magical world in a lot containing a demolished church – as well as a girl his age, Jolene, who is growing a garden of papayas on the abandoned property.  Though Jolene is gruff and unfriendly at first, he quickly takes a liking to her, and they somewhat begrudgingly become friends.  Jolene mocks his inability to live in the real world, where life isn’t fair, but Ware’s big dreams lead to the church becoming a castle, complete with a moat!  And then the terrible news comes – the property is being sold over to developers, who are going to turn it into a strip mall!  Will Ware be able to use his big imagination to find a way to save Jolene’s garden?  Read and find out!  (Out February 4, 2020) 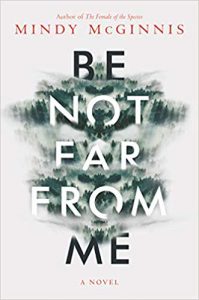 3) Be Not Far From Me – by Mindy McGinnis

In this book for teens, Ashley goes out hiking in the Smokies with her friends – who are clueless about survival, but totally at home getting drunk in the woods – and in her boyfriend’s case, cheating on her with her ex!  In a drunken rage, Ashley runs down a ravine blindly, until she hurts herself and realizes that she has no idea where she is or where her friends are.  In a survival story reminiscent of Hatchet, but darker, Ashley walks around for 15 days alone in deep mountain forest, lacking even shoes on her feet.  Will she make it out of the woods intact?  This book was so engaging that I did not want to put it down the entire time I was reading it (though of course, work and real life intervened at points).  Perfect for any teen who likes a good story.  (Out March 3, 2020) 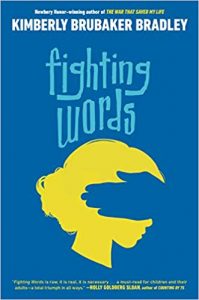 This is an intense but incredibly tastefully and well-written book for middle-grade children, dealing with topics like sexual abuse, consent, mental illness, poverty, bullying, and addiction.  Della is a ten year girl who has always been taken care of by her older sister Suki, as their mother went to prison early on for meth addiction, and her boyfriend, who supposedly took care of them after that, left them home alone for most of the week.  But one day, something terrible happened, and the sisters had to leave in a hurry and end up together in foster care.  Luckily, their foster mother, while a bit rough around the edges, is kind, and does anything she can to help the girls get through their trauma.  The book deals with these subjects in a compassionate, but realistic way.  For example, Della is quite prone to cursing – hence the title – but in the book, her curse words are represented with variations on the word “snow”.  The story is very worthwhile, and I didn’t want to put this book down, either.  Highly recommended for both children and adults.  (Out August 11, 2020)

This entry was posted in Book Reviews, Lost in a Good Book. Bookmark the permalink.