Comics For a Strange World by Reza Farazmand 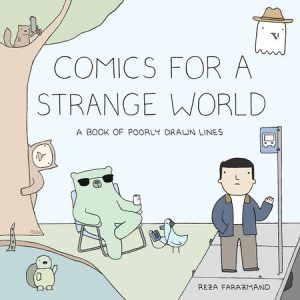 With sparseness and simplicity, Comics For A Strange World, reminds us of the beautiful absurdity in being alive. Whether the narrator is a smoking ghost, a caveman or a pigeon, Farazmand uses blunt honesty to delve into both common situations and bizarre adventures .
The comics first generated a huge following on the internet and since then he has been able to turn his ideas into two books: the first, Poorly Drawn Lines was a NYT bestseller. Leaving very few topics untouched, he slyly comments on our internet obsessed culture (the pigeon goes online), our escalating culture of violence (a squirrel buys a gun) and religion (God gets called out for being an old man in a bathrobe).
For fans of The Far Side, Sara Scribbles or Hyperbole and a Half, this book is not to be missed. Matthew Inman (best selling author of The Oatmeal) says it best when he describes Farazmand’s work as “Walk(ing) the line between deeply poignant and laugh-out-loud funny.”