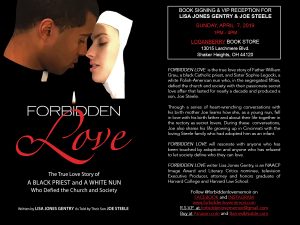 n Love, penned by Harvard graduates Joe Steele and Lisa Jones Gentry, reminds one of Colleen McCoullough’s 1977 epic bestseller, Thornbirds, intertwined with the 2016 award winning movie, Loving.  Forbidden Love is a retelling of the sexual-romantic relationship between Father William Grau, a black Catholic priest educated at the Vatican, and Sister Sophie Legocki, a first generation Polish immigrant from Buffalo who took her vows of celibacy at age 14. Vows were broken, and Joe Steele was born in a home for wayward girls in Cincinnati.

Far from prude themselves, authors Steele and Gentry don’t pull any punches in describing the heated details of Bill and Sophie’s affair, wherever those details lead, such as a motel in Canada, a car in a secluded park, or a rectory. What’s fascinating about Forbidden Love is how Bill and Sophie violate the rules of the Catholic Church (sometimes right in the church) and the racial rules of 1960’s America. Bill and Sophie faced hostility from both black and white people for their miscegenation before the Loving v. Virginia Supreme Court decision in 1967 and before the signing of the Civil Rights Act of 1968. This smart and sex book is a great read for its erotic content, scandalous tidbits, and its historic context.