Lost in a Good Book

I love finding old things in books.  Like my pals at Forgotten Bookmarks, I’ve decided to share some of the neat ephemera I find.  I’ve been doing this for years, actually, and making card collages of ephemera in a series I call Lost in a Good Book. So here’s to a new format for that series. 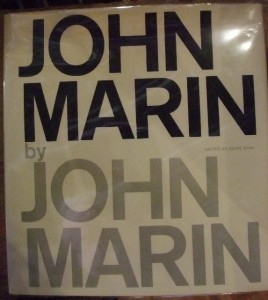 A typewritten note was laid-in, on acidic paper. 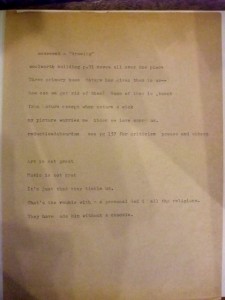 woolworth building p.91 moves all over the plac4
Three primary hues Nature has given them to us–
how can we get rid of them?  None of them is absent
from nature except when nature s sick
my picture worries me    those we love worry us.
reductioadabsurdum   see pg 137 for criticism  pcasso and others

Art is not great
Music is not grat
It’s just that they tickle us.
That’s the trouble with t e personal God i  all the religions.
They have  ade him without a chuckle.

I think I’ll just leave the note in the book for the next owner.

Harriett started Loganberry Books in 1994, acknowledging that what she liked best about perpetual school was the physical objects called books. Her personal biblio interests range from Robert Lawson to Virginia Woolf and various and asundry illustrated editions of Alice in Wonderland and old lepidoptera.
View all posts by Harriett →
This entry was posted in Lost in a Good Book and tagged art. Bookmark the permalink.