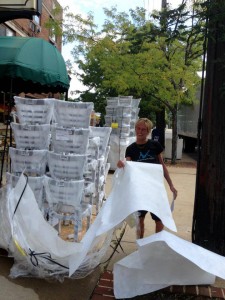 Laurie was a friend, and she owned the restaurant next door, Larchmere Tavern. I go there often, to get a break, read PW, have staff meetings, and, of course, to get some food. We even had our annual staff party there this year. While it’s nice to have a tavern next door, that’s not what I am most grateful for. I’m just grateful for Laurie.

We were typical nice neighbors: exchanging books for food, borrowing address labels and advice on services, helping with technological issues (Laurie was more of a Luditte than I!). She didn’t have a lot of vegetarian options on the menu, but she would always make a grilled cheese for me, and trained her staff to do the same. We collaborated on a couple of events, and I suggested renters and presenters at my space to use her catering services. Laurie always treated me to her fabulous gazpacho on Larchmere Festival day, thanking me as if I personally brought her every customer of the day.

She was an avid and passionate runner. When I tried to take up running, she was so encouraging and supportive, like I had complimented her with my good taste. I told her I didn’t go very fast, and she leaned in and gave me the biggest smile, as she let me in on a great secret: “it doesn’t matter!”  She wanted to know what inspired me to start running, and when I told her grief management, she didn’t pry, she just smiled and welcomed me to the club. She was sad when her health dictated that she stop running, but she just started running in water instead.  She never stopped — that is, until she developed debilitating back pain, that was later diagnosed as stage IV liver cancer.  She was gone just four months later.

I will miss Laurie. I should probably start running again.

Harriett started Loganberry Books in 1994, acknowledging that what she liked best about perpetual school was the physical objects called books. Her personal biblio interests range from Robert Lawson to Virginia Woolf and various and asundry illustrated editions of Alice in Wonderland and old lepidoptera.
View all posts by Harriett →
This entry was posted in In Memoriam, Larchmere. Bookmark the permalink.