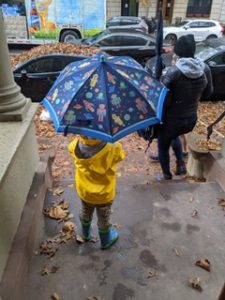 This was a short book of children’s poetry I had as a child and it seemed like an older book even then. So it is at least 35 years old but likely more. I remember a few of the poems vaguely. One was about the changing seasons, I remember Autumn had apple trees and children collecting them. And another about the day passing using birds i.e. the sun rises with the robin…night come on the wing of a lark or something like that? There was also one about a toothache. What I remember the most is the illustrations. They were very delicate with children that had chubby cheeks. The trees were drawn with curly cues. For the toothache one the little girl had a handkerchief tied around her face. It was in English but maybe British because of the words that were used like lark and morning tea.

The book itself was about the size of a sheet of paper and covered in light blue cloth. The cloth was much like my Hardy Boys books. The title was on the binding and for the life of me, I can’t remember what it was. Something like: The Robin Brings the Sun or the Robin Sings the Morning…I’ve tried googling a lot of variations but since the book is older I’ve given up trying to find it that way. Due to how I remember it and since the front of the book didn’t have the title I’d assume it may have had a dust jacket that had gotten removed at some point. I was hoping to get it from my mom for my daughter but they’ve moved so many times it got given away at some point. Would love to find it as it was a favorite when I was little.

Just thought of this book today because it seems somewhat prophetic given the more recent school strikes for climate, referencing it not being fair that it’s the children having to be the ones to make the grown-ups wake up! I think the subject was about nuclear bombs more than environment, nuclear threat being the threat of the day in the UK in 1980s/early 90s.

The book is very striking, minimalist and arty, the cover and pages being mainly white, with few words, and many small colourful stick people (each max 1” high).
I’m not sure which age range it was aimed at, could be teens or young adults or just any adults.
It is written naively as if by children for adults.
The format is large and chunky, perhaps about 8 - 9” wide by 10 - 12” tall and 1 - 2” thick. The cover as mentioned is white with some colourful stick people.
I think I bought in UK (tho could possibly have been in the USA) in the early 1990s (so published no later than 1992).
I cannot remember the title but I think it MIGHT have ‘Peace' in it… but it might not!!

It would be great to find it again.
Thanks for your help.

The book is from the 1990s or 2000s. i think it’s just called “Farm” and it’s quite large – 18 inches wide by 10 inches tall or so. The spine is on the top – it opens upwards. It’s completely hand lettered with pen & watercolor drawings of life on an old farm (English I think). The cover is broth cloth. It may be more of an art book than a children’s book. I believe the author might have a French name. Thanks for your help!

Seeking a picture book, illustrations probably pen and ink, blueish tones. A large, poor man lived in a small house. A rick small man lives in a mansion. They are each becoming tired of their own houses, so agree to swap, expecting to love each other’s house. They initially do, but ultimately discover that the preferred their own house. Date: I was born in 1976, so earliest read would have been 1979-80. Location: I live in the UK (England).

I think this was in an anthology of an author’s short stories. I thought it might be Elizabeth Goudge, but I haven’t had any luck finding it. Woman had long lost a cherished doll, and she turns up when the local pond dries up. Set in England before the 70’s. Thanks!

I am in desperate search of a book for my dear British friend. She grew up in Suffolk, England, born in 1958, and remembers a book she used to pour over as a girl:
Possible title: A Place of Your Own
Contents: pictures and descriptions of homes, rooms, treehouses and places where children (and maybe young adults) escape to be kids
Publication Dates: at least published by 1972
Location: read in Suffolk, England

Hi! I hope you can help me because this is driving me batty LOL. I believe it was a book or series of children’s books. There was some sort of isolated world outside time, but it was starting to show cracks and it was feared their world was ending. Two children believed a girl on a train being sent away from London during the war was responsible, so they traveled in time and kidnapped her . Ultimately, they were convinced she was innocent. Then, they had to hide her as a visiting cousin; there was a lot of advanced technology, like a money chip and a pen that had special abilities when she went to school with them. The place traded with other time eras; there was a river around it that played into the plot. Ultimately, I believe an uncle and his daughter were the bad guys. There was a battle; the children were locked up in some sort of phasing clock tower. There was a powerful, godlike couple who ultimately woke up/remembered their real selves and put everything to rights. I believe the girl’s family was saved and allowed to come live with her there. That’s all I can remember. Thanks very much!

It was about a girl in England who lived with her mother and no father. They lived in a flat, which was the first time I had encountered that word. The only thing I can distinctly remember was that the girl was hiking in the woods, alone, I believe, and fell and broke her leg and then had to figure out how to get help.