I’m trying to find a children’s book my mother read me over 50 years ago.

The mouse tells all the animals at the waterhole:

There’s a creature in my house yelling and screaming and throwing the furniture out of the windows.

He says this to lions, tigers, giraffes.  In the end, it turns out the creature is  an owl that the jungle animals trumpet and roar at, and it flies out of the mouse’s house in the tree.

Then, the lions realize they are hungry, and the giraffes and zebras etc. run away before the lions and tigers can get them.  The mouse returns to his house in the tree.

I’m writing on behalf of my father in law. He is welcoming a new grandchild soon and wants to find a book from his own childhood to give to the new baby. He says:
“I was born in 1951 and I was given a child’s book – I’m sure that Timothy Tiger was in the title and the story had something to do with gaining courage and some kind of deed that he performed by going out into a stormy night to find his courage. Any help you can provide will be most appreciated! Thank you”

My grandson remembers a book he wants to read again. He’s 26 and thinks he was around ten when I read it to him. Setting is Africa in the bush and the whole “journey/goal” is leading toward this main character “hunting" down a tiger and getting the “perfect shot”. At the end the hunter turns out to be a photographer and what an ending that was - the tension in the library was so high when I read that story. So I’m glad my grandson remembers that book.

I was a librarian in a pre-school through 3rd grade school and I bought it for our library so that would be between 1995 and 2005 but that doesn’t mean it was a new book at that time. I often bought used books from some big online store in Portland as we were just learning how to “Google” items like that way back then 🙂

I read this anthology of children’s literature when I was younger than 12 (I’m 29 now). These probably are not definite, and I don’t know if I would recognize the cover if I saw it, but here’s everything I can remember from it.

There was a Chinese (or some other Asian culture, possibly Indian but I think it was probably Chinese) fable about a group of village children who befriended a tiger. The village’s men chased off this tiger, and then the crops didn’t grow that year, or some similarly implied consequence ensued. I remember this story having an illustration of the children and the tiger under a tree. Or the tiger peering out from the branches of a tree.

There was also a story about a group of kids baking a cake for their babysitter, but they botched it up somehow, getting the ingredients wrong. I think that the babysitter found out about it, and was so grateful for their thoughtfulness that she bought or baked them a cake herself.

Then there was a poem about a kid explaining how he disciplines his dog with a rolled up newspaper. I also remember an illustration with a full-view of a backyard with some kids building a tree house, and there might have been a sign that said “No Girls.”

I don’t know when it was published, but the style was similar to the 40’s and 50’s style used in the “Dick and Jane” books. It might have a similar title to Good Times with Our Friends (a book by Dorothy Baruch) because I asked my Mom for it when I was a kid, and she confused the titles. I thought I’d found it when I ordered Through Golden Windows: Good Times Together, but although there were many similarities, the tiger story, dog poem and tree house picture weren’t in there.

I’m looking for a children’s book I read in the late 80’s. From what I can remember it was about a boy in pajamas that is chasing a tiger or other large cat, but pretty sure it wasn’t a lion, I don’t remember a mane. The tiger was hidden on every page, in the background such as hidden as a pattern of stars in the night sky, a symbol on the border of a tent, or made of vines. As far as the setting I believe it was in the boys’ dreams. The book had a very surreal feel to it, and the book was filled with illusions. These illusions made a thing look like another, like a strongman made entirely of things from the sea, like seashells, crabs, etc. Here’s an example of the type of illusions I remember in the book 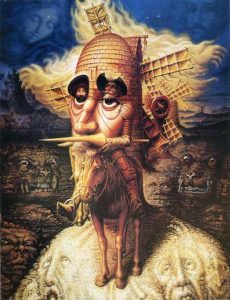 They do visit a circus at one point, because I seem to remember one page outside the circus tent, and possibly one more. But the book wasn’t entirely centered around the circus, it felt like they were just passing through. The circus is a google trap though, there are lots of kids book involving the circus and a tiger, and I haven’t found one yet that matches what I remember. The book is definitely not I Spy A Tiger, Heart of A Tiger, Riding the Tiger, A Lion in the Meadow, A Tiger Took Me to the Circus, It’s a Tiger, or Come the Terrible Tiger. Please help! I’ve spent hours searching on the internet, but I keep getting nothing.